I am one of those people who likes slightly creepy historic places, catacombs full of skeletons, subterranean tunnels, old cemeteries, count me in! I found these photos from 2010 when we lived in Italy and visited the Naples Underground. Yes, you got to hold lit candles down there.

You can understand then how excited I was to find out about the underground tour in Edinburgh of The Real Mary King’s Close, a street whose inhabitants were evicted in the 17th century when construction of the Royal Exchange was undertaken and covered over part of the Close (street). It is against Scottish law for anyone to live underground so residents were forced to leave.

Closes were named after prominent people who lived on them. It was unusual for one to be named after a woman, but Mary King was a merchant of some means. The tour of the Close is lead by a guide and actor portraying an actual 17th century resident of the Close, on my tour, it was Mary’s youngest daughter. You are lead through areas of the Close and its history is shared through stories of actual Close residents, some poor, some wealthy and some plague afflicted.

Photography underground was not permitted, but I contacted the museum and they graciously provided the following photos.

In the house of very poor residents we learned how they took the communal toilet (a bucket) and emptied it into the streets of the Close while shouting “gardyloo”, yuck!!!

We visited the house of one family suffering from the plague as they were attended by a plague doctor dressed in a creepy mask full of herbs and spices meant to keep the miasmas or putrid air thought to cause the plague from reaching them.

Some rooms on the tour are very fragile. You are advised to not touch the walls or bump into the vices that are literally holding up the ceiling in one room. Visible on the walls were imprints of wallpaper from several hundred years ago.

Later other portions of the Close were covered over by other construction projects and the last person to vacate Mary King’s Close did so in 1902. He actually continued to work in the Close until the 1930s (it was only illegal to live underground, not to work underground). In WWII, some of the Close building were used as air raid shelters.

Stories of hauntings in the Close can be found online, but I am glad only one part of the tour addressed any kind of paranormal activity, the story of a psychic who reported sensing the spirit of a young girl stricken by the plague and then abandoned in the Close. The psychic purchased a tartan Barbie and left it for the girl. There is now a pile of other toys visitors leave for Annie.

Whether you are interested in history or haunted places, The Real Mary King’s Close provides a rich experience. 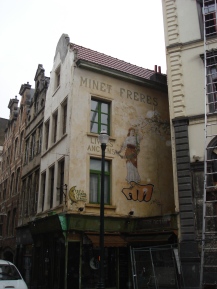 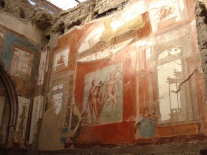