This is the first part of an ongoing series in which I interview experts on a variety of topics.

The first topic for this series is SCOTTISH ANTIQUES.

I know Patrick’s shop well because it is located very near my flat on Causewayside in the Newington neighborhood of Edinburgh. I go into his shop to admire the antiques and bug him about once per week. I have been to a lot of antique stores in Edinburgh and his is by far my favorite for large pieces of furniture. I also like his shop because he is personally a very funny guy. The sign welcoming you to his store says “Browsers Welcome Suppliers to the Impecunious Gentry”. I had to look up what impecunious meant. It means “having little or no money”, that is an example of Patrick’s wit.

Q: “Patrick, how long have you been in business?”

Patrick responded that he has been in business for 28 years.

Q: “Have you always been at this location on Causewayside?”

He responded that no, not always. He has been on Causewayside for 16 years.

Q: “Have you always been an antiques dealer or did you have another career before you had a shop?”

Q: “What influenced you to get involved in antiques?”

Patrick said that his father was always involved with buying and selling. I asked if that was through a shop and he said no, just out of their home. He never wanted to be tied to set regular hours that a shop demands.

Q: “Are there differences between Scottish and English antiques, types of wood, design, etc.?”

He said that they are fairly similar, but that certain wood such as satin birch are found more in Scottish pieces. He also said that Scottish and Irish pieces tend to have more carving than English pieces. Patrick has a beautiful satin birch piece with carving in his shop right now dating from about 1900.

Q: “I have noticed that you sell very few smalls, or accessories, bric a brac, that you see so often in other antiques shops, why is that?”

Patrick responded by saying that he thinks having a lot of small objects on top of the pieces draws your attention and focus from the piece. He also said that years ago you could get more money for small pieces like wally dogs, but now, that is not case unless they are very specific small items. Wally dogs? I asked him what wally dogs were. He said they are a matched pair of dogs that every single British home used to have, usually by the fireplace. I did some research, here are my findings on wally dogs, in case you are wondering. I really do learn a lot at Patrick’s shop.

Q: “What is your favorite style?”

He said that arts and crafts design is his favorite, especially pieces with copper. I asked what era that was and he replied around 1890. Here is an example of an arts and crafts piece in his shop.

Q: “Without giving away any secrets, (this is an insider’s perspective, remember) where do you find your pieces?”

Patrick said he has developed contacts with people all over Scotland that span many years. He gets things mostly from house clearance or removal companies. They contact him if they have something he might be interested in and send photos. He sometimes travels 100 km to pick items up.

I think that is a very important piece of information. Patrick has put many years of work into developing personal relationships with people in order to find the items that he does. That is what still makes shops like his relevant, in my opinion.

Also, I sometimes cannot believe how reasonable his prices are. Remember, he caters to the “impecunious (having little or no money) gentry”. This dresser is priced at 155 pounds ($199). It is a pine Victorian piece mid 1800s, lots of great patina. Also, I happen to know that haggling is NOT off limits in the shop.

Q: “I notice that nothing in your shop is painted. Painted furniture is very popular right now with a lot of people painting items themselves. Do you ever buy painted pieces?”

Patrick said he very rarely buys painted items, only if he knows what is underneath and also if he can tell what kind of paint was used so he knows how to remove it easily. He said he does strip varnish off pieces though.

Q: “Are there people from other countries that come in to buy antiques to ship internationally?”

He said yes, but a lot of the international buyers go to large antique fairs/shows and buy items in bulk. They will have shipping containers at the ready to load on boats and ship out. He said he also does trades with other dealers fairly often.

My favorite time to pop into Patrick’s shop is when he is working on a piece, fixing knobs, waxing a dresser. I just happened to find him doing all of those things the day I stopped by to interview him.

Patrick does sometimes get some interesting smaller items, such as this large glass bottle. I told him that those were used to decant wine in Italy, demijohns, but he said it was for something more industrial, chemicals maybe. It did not last long in his shop.

My favorite pieces in Patrick’s shop are the pine Victorian pieces. They have such great wear and that natural waxed patina that really shows what a long life they have had. You can see where many hands have touched the edge of this piece and made it smoother. I think their simplicity and functionality has really stood the test of time.

I love this very skinny and VERY tall cupboard. I told Patrick that while it is a practical piece for Edinburgh where many of the Georgian era flats have very tall ceilings, many houses in the US do not have those tall ceilings and it may literally not fit in a lot of American homes.

Patrick said that a lot of these old washstands are being re-purposed for bathroom vanities.

This antique kneeler that would go in front of a fireplace not only has beautiful needlework, but it has beading woven through out.

I hope you have enjoyed this insider perspective and I hope that Patrick does not tired of me coming in every week to learn about Scottish antiques. He keeps his Facebook page updated with items in his shop so you can always catch a glimpse of what he has. 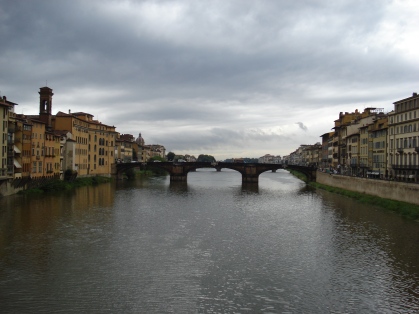 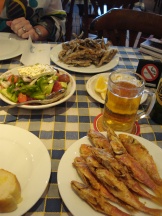 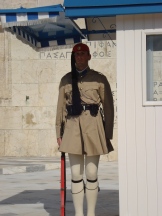 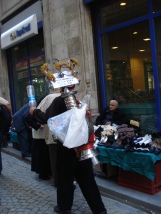 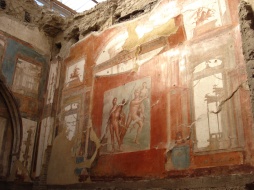 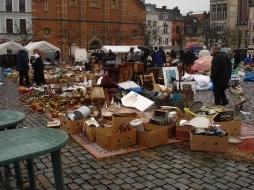