Looking for some where cool to go in Italy? I mean really cool? Head to Matera! It’s a bit off the beaten path compared to the most popular of Italian destinations, but it is worth the extra effort.

In a previous post, I talked about spending a few days in trulli houses on Italy’s heel in beautiful Alborobello. Matera is located only 42 miles from Alborobello and is an easy day trip.

The ancient city or Sassi (literally meaning the “stones”) has evidence of settlement from prehistoric times when inhabitants built caves into canyon walls. It is Italy’s oldest inhabited area. Put simply, it is stunning!

By the 1950s however, the Sassi area was referred to as Italy’s “shame”. People were still living in caves, there was no heat, water or light, infant mortality was high, infectious disease flourished, and illiteracy was at 90% so the Italian government removed and relocated 20,000 people and became owners of their homes. In the 1970s a few squatters moved into the Sassi and were eventually connected to municipal services and granted legal residency. Artists followed and opened a few galleries and cafes. In 1993 Matera became a UNESCO World Heritage Site and in 2003 Mel Gibson filmed “The Passion of the Christ” there. By 2006, 20,000 people lived in the Sassi. Today, the Sassi is an eclectic mixture of art, cafes and B&Bs. One moment you feel you are walking through a prehistoric landscape and then you see a piece of modern art in the middle of that landscape. There are no cars among the narrow and steep alleys of the Sassi, a welcome change from most of Italy’s large cities with the hundreds of honking Fiat Puntos and scooters swerving through chaotic traffic.

A definite DON’T MISS is the Casa Grotta di Vico Solitario, an old cave dwelling that has been turned into a museum with typical furnishings. You can imagine what it was like to be a large peasant family living inside the stone walls with a high bed that allowed chickens and other small livestock to live underneath and large pieces of furniture that had deep drawers for small children to sleep in. It is strange to think that people were living in this cave as recently as the 1950s before the Sassi was depopulated.

Looking into the distance you see the multitude of caves carved out in the surrounding canyon walls and wonder how many people called them home. 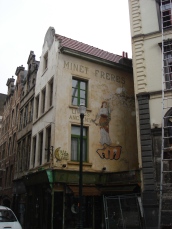 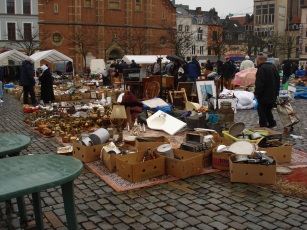 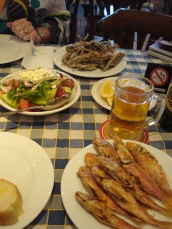